Who gets the most snow in the Northeast? If you are looking for a new snowboarding mountain to call home or some good places to go snowboarding/skiing in New England then this is for you.

The biggest mountains or ski areas in the Northeast lie in New York, Vermont, New Hampshire and Maine.

The tallest mountains in the Northeast lie in New Hampshire (Mt. Washington), but is that where the most snow is?

Yeah, possibly due to its’ higher elevation, but there is no ski area up there and areas to the west tend to get more snow so they say.

Who gets the most snow in New England?

This is kind of general but interesting. The most snow (annual snowfall average) unfortunately in New England is in a portion of New York known for its’ lake effect snow but there aren’t any tall ski areas there. Big NY ski areas like Whiteface and Gore are to the east.

Then in VT you have Jay towards the top leftish, Stowe and Smugglers. Then going south you have Sugarbush, Killington, etc.

Then the deepest places in NH are in the very north, around Mt. Washington, Wildcat, Cannon, Bretton Woods and Loon ski area.

The deepest snows there are maybe 200″ a year in Wildcat and the rest being closer to 160″ like Cannon was where I worked.

Cannon has a similar or higher elevation than some places in VT but it’s icy as hell. 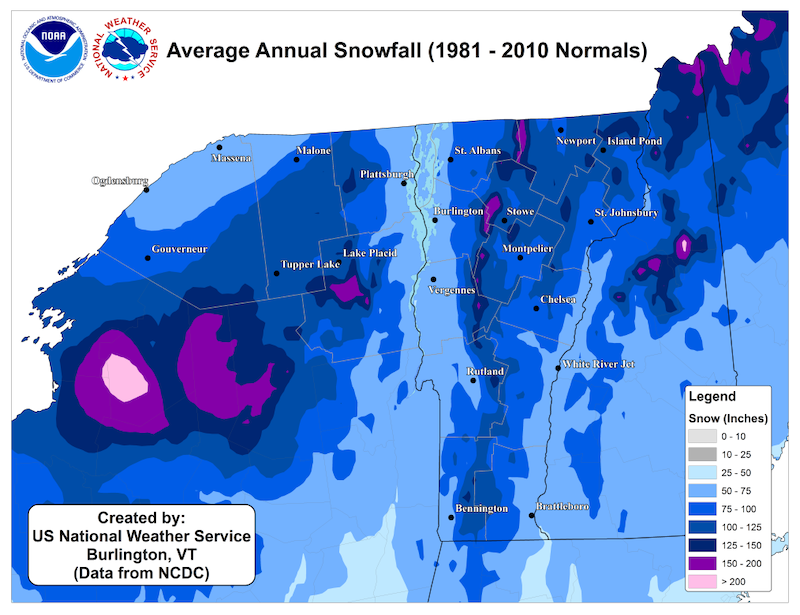 Highest snowfall in Vermont and the Northeast so they say:

I was skeptical and dug a little deeper and found city snowfall totals. They did kind of vary depending on the site, but I did find usa.com and New York gets the most snow. But like I said there are no big ski mountains in those areas that you will see below.

A total of 294 results found. Show Results on Map.

Troy is near Jay Peak and Stowe is near Stowe and Smugglers notch.

A total of 264 results found. Show Results on Map.

Jackson is near Wildcat and Attitash. Up north where the higher snowfall totals are there isn’t any open ski area now. Maybe Balsams Wilderness will open again.

A total of 470 results found. Show Results on Map.

So why does Jay get so much snow?
Well, it’s further north and colder so when it might be raining in other places it could be snowing at Jay.
But I can’t imagine much more snow because of that.
Yet, another thing is that to the west of Jay there are fewer mountains to absorb the moisture that hits Jay. It seems like many of the storms come from the west.
And that could explain more snow and why NH and Maine get less.

Do they get as much as they say?

IDK, maybe, but I wouldn’t be surprised if they inflate their totals.
This last season they claimed around 300″ of snow but only had a base of like 18-48″ or so?
Cannon where I worked this last season only claimed like 130″ for the season and for a while their base total was similar. I went to Jay in the early season December and they had a little bit more snow then.
A few months later I went to Smuggs and Stowe and there wasn’t a significant difference.
I’ve done most of my riding out west and areas that claimed they got similar amounts of snow usually had deeper bases.
But you got to ask where are they measuring this snow?
Is it in the sun or shade?
Is it on a groomed trail?
Did they blow snow on that trail? If so how much?
A visible place where everyone could see would be best.
Maybe something like Grand Targhee.
Instead of telling us how much snow you have show us.

I am planning on going out west next year. This last season was good to be riding again, but the west is the best for snowfall.