I got promoted to green belt in judo yesterday at CCSF. And I am being a bit sarcastic when I say “pleasure”. When you get promoted there is a certain sort of ritual and part of the ritual is that you line up and get to throw the people who got promoted 3 times – once for yourself, once for the teacher and once for the person promoted.

Last week Jackson got promoted to 3rd degree brown belt. I thought it looked a little brutal when I saw some people throwing him pretty hard. I was thinking that maybe that treatment was reserved for the higher belts and maybe newly promoted green belts wouldn’t get thrown.

The four of us promoted got thrown 3 times by each classmate (16 classmates). So that means we got thrown 48 times in about 10 minutes or so. This isn’t like randori. You have no fair chance. You just have to accept it. You let the other person throw you.

And some won’t throw you that hard and others will. I was a bit worried about that.

I have been practicing judo since around 2015. I started with jiu-jitsu and gradually got into judo. I didn’t take it as seriously as jiu-jitsu and didn’t practice as much, like 2 half classes a week.

I realized that it was important to learn judo because if you don’t know any take downs or throws then how are you going to get your opponent to the ground?

So from a self-defense perspective I think you have to know some judo to be a better grappler.

I didn’t really do a lot of randori (sparring) with judo. I would often go to jiu-jitsu Tuesday and Thursday at 6 and then stay for the first hour of judo which follows jiujitsu. I would do some technique and then go home.

Then I tried to add a little randori with a few people before heading out. And I recently started to stay a bit longer to do some more.

I don’t think my judo is very good, but you know it’s getting better, slowly…

Learning to fall is part of it too. I try to work on my falling. Sometimes it’s fun to fall like when you have it timed right and you break the fall with your arm(s) just right.

Other times it’s not so fun especially when you don’t see it coming or you get the wind knocked out of you.

The photos are from the CCSF judo page.

This is how I made Kombucha at home from scratch without a scoby. This was my first time and I thought it turned out pretty good. It was easy and cheap to do.

HOW TO DO IT

1. Get a large glass jug. Glass is better as plastic leeches into your tea.
2. Get some green tea (loose leaf, bags or just bagged green tea).
3. Buy some kombucha (plain) at the store. I suspect flavored might work too, but was told plain.
4. Get some sugar.
5. Heat your water.
6. Fill your jar.
7. Add the tea and steep 5 minutes or so.
8. Take the bags out and add the sugar. I was told a cup, but did about half of cup and it was o.k.
9. Stir and dissolve sugar.
10. Let it cool a bit then add the kombucha.
11. Cover the jar tightly with a thin cloth or coffee filter.
12. Keep it at room temperature out of the sun.
13. Wait 7-10 days or longer if you want less sugar.

Mine turned out good. I tasted it around 8-9 days and then partook on the 10th day. It was good!

A little scummy thing called a scoby starts to form. Mine was pretty thin I did read a 1/4 inch think was o.k. Mine was probably an 1/8th of an inch thick.

HOW I MADE MY SECOND FERMENTATION

Today I made a second batch. I poured out the kombucha into bottles and my tummy;) Then left that little scummy scoby in there. Then poured back in the mixed tea and sugar.

But before I did I let it COOL. I figured the hot water could damage the scoby.

The scoby kind of sank to the bottom as it was pretty thin, but I think it will be alright.

This is a brand NEW judo gi that I have for sale. It’s cheap and it’s good quality. It includes a jacket, belt, and pants. 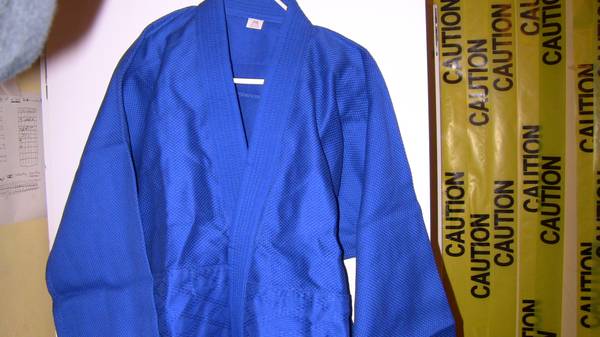 Guess it would fit someone about 20-40 pounds heavier and/or a bit taller. I normally wear an A2 yet this was a bit big and may be closer to A3. It has a different sizing which is 4/170.

If you are a student a CCSF [or not], in San Francisco and are looking for a new gi for judo/jiu-jitsu then let me know and I can bring it in sometime.

You can buy it on Ebay too for $59 +shipping or directly through me for $50 which is what I paid for it.

“Spend more time in a squat position throughout the day. Just doing that will improve your digestion, your knee health, your hips, and it will start to move things in the right direction. Another is hanging, which is so beneficial for shoulders.” – Ido Portal

Squatting has actually improved the mobility of my legs and knees. I had stopped doing them or positions in yoga like child’s pose and after a few years realized I couldn’t kneel any more or put all of my weight done in a kneeling position when I started jiu-jitsu.

But after months of simple squatting I regained that ability.

Yoga is also a great way to improve your balance as there are many single leg positions to do.

I have been doing some squats as an exercise too, but starting tomorrow I will add some single leg squats in there as those are supposed to be better in that they add variable resistance and balance into the mix.

Those things will supposedly make your bones stronger. And when your bones are stronger your muscles can get stronger according to this video.

Listen to the last few minutes starting at (55:09) of this podcast to get some ideas on how to improve your bone density.

Funny, while watching the above video and listening to the guy talk about bone density and some exercise one of the things I thought of were burpees.

He said something about Tony Robbins jumping on a mini trampoline probably helps his muscles and tendons, but maybe not his bones because of the give in a trampoline. That’s when I thought of doing burpees.

That’s when you combine a push up, squat and jump in one quick exercise. If you do a bunch of them fast in a row you’ll get a good work out.

Before I kinda wondered if they were bad for your knees jumping. But here is some evidence that jumping is good.

How to do burpees

When I first did these I would be out of breath after 10, however with time they get easier. It’s a good exercise as you are using a lot of different muscles too as well as making your bones denser.

If burpees are too difficult you could try jumping jacks or even box jumping.

When I weighed myself at the last jiu-jitsu tournament I weighed a bit more than I thought. I have been doing a ketogenic diet for a while. I think the reason why I gained a few pounds was that I was eating a jar of peanut butter or occasionally almond butter every 2 days.

I was also eating a lot of cheese and coconut. Despite burning a lot of calories doing jiu-jitsu and working out 2 days a week I still gained weight and I think it went to my mid section.

Some people in Keto forums thought I was also getting too many carbs from nut butters.

But some things have changed and I am going to stop eating peanut butter and almond butter at least for some time. But not so much for the fat as it is for the lectins.

I started watching some of Steven Gundry’s videos about lectins in plants. I have heard before of people having allergies to peanut butter and others having lactose intolerance.

I never really noticed a problem with those things except for a bit of acne if ate a lot of cheese or peanut butter.

So I am going to try to cut those things out from my diet. As well as some other things like the cucumbers that I used to dip in peanut butter.

Cheese and peanut butter do have some nutrition, but are high in omega 6 fat which causes inflammation. That was the main reason why I was going to cut those things out.

Too see if some pain disappears.

And a whole lot of other foods…

All of those things have lectins that can cause inflammation like arthritis and digestive, heart or other problems.

Since I started keto I haven’t been eating grains, potatoes or rice. I have occasionally eaten beans which are not keto, but I have occasionally indulged. Which I guess if they are pressure cooked or boiled are better but not totally free of lectins.

According to Gundry sweet potatoes and other tubers are o.k. I haven’t been eating those either but I might try. Those aren’t keto foods as they are high in carbs, but…

His diet or approved food list is kinda similar to keto in some ways in that he recommends lots of healthy fats like avocados and olives and only seasonal fruit.

What differences have I noticed since starting keto? Well I may have not always been in a state of ketosis over the last 6 months or so as I may have been eating too much peanut butter at times.

It’s higher than some nuts in carbs.

However, I can’t say that I notice any major changes. I was pretty lean prior to starting it. I might have lost a couple of pounds initially, but as I mentioned I gained a few pounds. A lot of people do keto to lose weight. I don’t think it did for me.

Maybe if I go back to occasionally eating sweet potatoes, carrots or other carrots I will notice a difference.

I watched a lot of Dominic Augustino’s videos on Youtube. In fact he was the one that probably inspired me the most to try it. But he said some people do o.k. with some carbs.

Keto seems pretty strict I have been o.k with eating that way yet occasionally may want to eat a carb like a carrot or parsnip or a piece of fruit which I have hardly eaten since starting keto.

Eating less fruit is also what Gundry recommends. And so does keto.

His work sounds pretty interesting too. I found his stuff by digging into foods that were high in omega 6 fat. Here’s a video by him…

It’s kind of similar to keto in some ways as I mentioned, he also recommends intermittent fasting which I have been doing for a while too.

Yet it’s specific to certain foods and how they may affect your health. So we are going to cut those out for a couple months at least and see what kind of results we get.

This is the video version of a previous post. This is about how long it took me to get a blue belt in jiu-jitsu.

You can read the previous post here called the road to blue belt.