These are some side hits and jumps that I made at Cannon Mt. ski area in NH in 2021 and a few  farmcountry ones near where I live in Monroe, NH.

Sometimes you just see a spot like ohh, there’s a jump there if you dig it out or pile up some snow. And sometimes the snowcats will take them out when they widen trails. Of course side hits aren’t in the middle of trails like terrain park hits, but normally on the sides and out of the way.

But by the time you go looking for these or even find this post they could be long gone because conditions change everyday.

Here’s me hitting a side hit I built.

Last season I made a few side hits in Tuckerbrook. This one which was off the side and near the top of Fox tail was one of the better ones while it lasted.

Like another mentioned here it started off as a snowmaking whale on the side of the trail. But I chiseled out a take off one day when the snow was soft and enjoyed it for a few days before it turned to ice.

It’s the beginner area, the lift is slow and the runs are short. But there are a few fun blue runs, some rollers, banks and the snow tends to stay nicer here than the upper mt probably cause it is less steep, less windy and gets less traffic.

I worked on a few hits on Turkey trot, Bear Paw, Fox Tail and Deer run in early 2021.

I even sort of made a cool gap between Fox tail and Bear paw late season. There’s an area there that with enough speed you can jump from Fox tail over some pipes (hopefully covered in snow) and land on the side of Bear Paw. I had to shovel some snow in the landing to make it smoother and you have to ollie hard off the side off Fox tail. I was a little sketched out but knew I could do it. And I actually recorded it but when I went to play it back the camera phone had shifted while recording and I lost it ;-/. 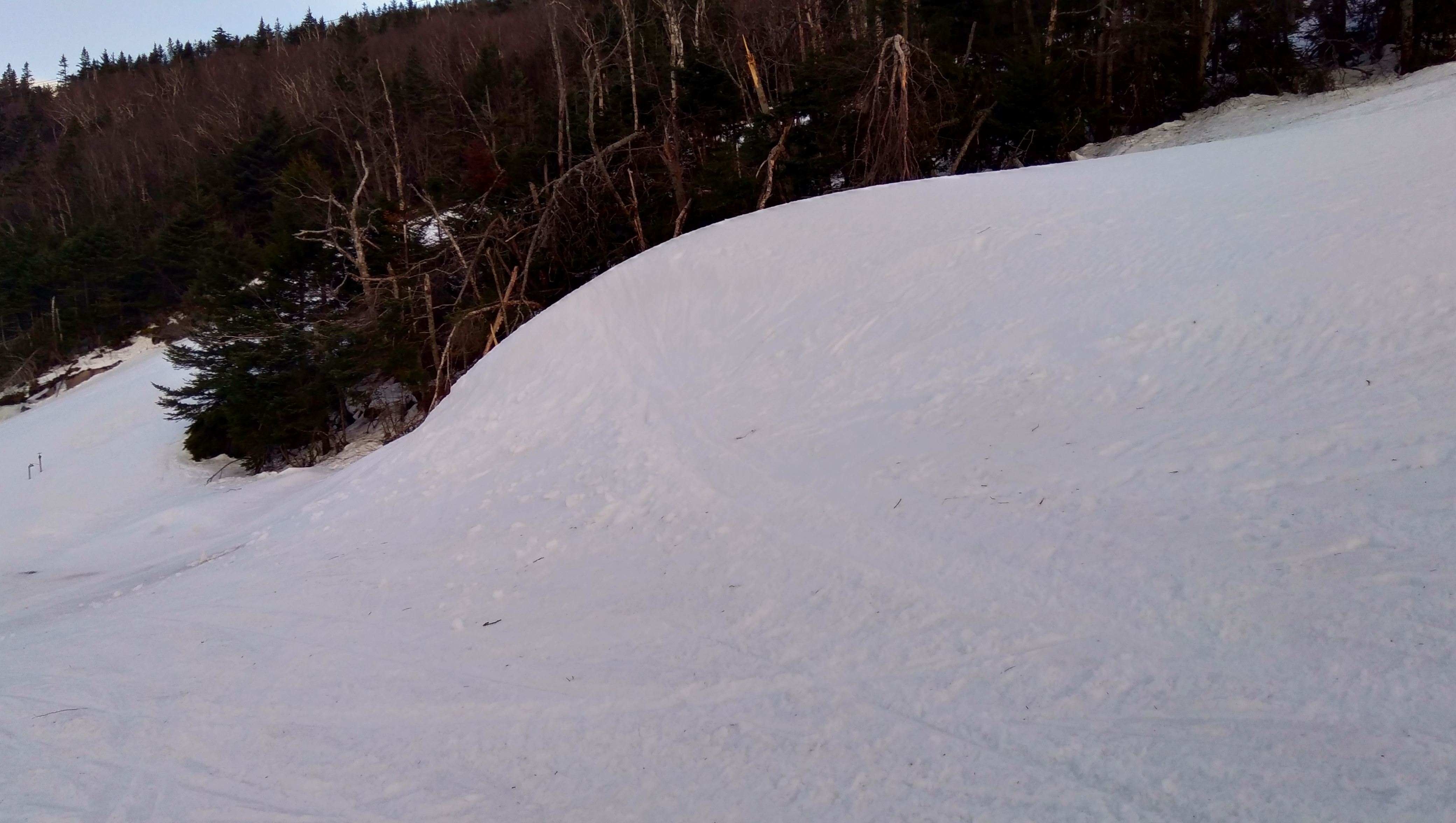 This one is on Spookie. It’s a snowmaking whale that seems to be sitting there and it originally had a straight wall of ice on it carved out by the snowcat which made it not hittable but I saw the potential and cleaned it up.

Snowcats up there often leave these icy walls on the sides of some trails and that is kind of dangerous and ruins any jumps or wall riding on the side of the trail – at least at Cannon. You can hire me to go in and smooth them outˆˆ.

It was/is a big block of ice and I first went in there with a shovel and tried chipping away at it to smooth it out and no way. Then the next day it heated up softened (when I took the pic) and I went back.

I was debating carving out a groove to hit it like a hip but just ran out of time. I smoothed out the wall and transition to make it more approachable. It has more potential to work on it. At the moment the best way to hit is like the line you see above if you look closely.

Started making a hit above it too so you could hit it along the tree line pointed towards middle ravine, but that needs more snow.

Taft slalom is my default choice trail off the top of Cannon. Upper ravine is nice too especially when the snow if good because you can carve those fun turns like a bordercross trail.

But I tend to stay on the sides of Taft. And you can hike out to the Saddle when the snow is good.

Here’s a fun hit especially when the snow is soft. 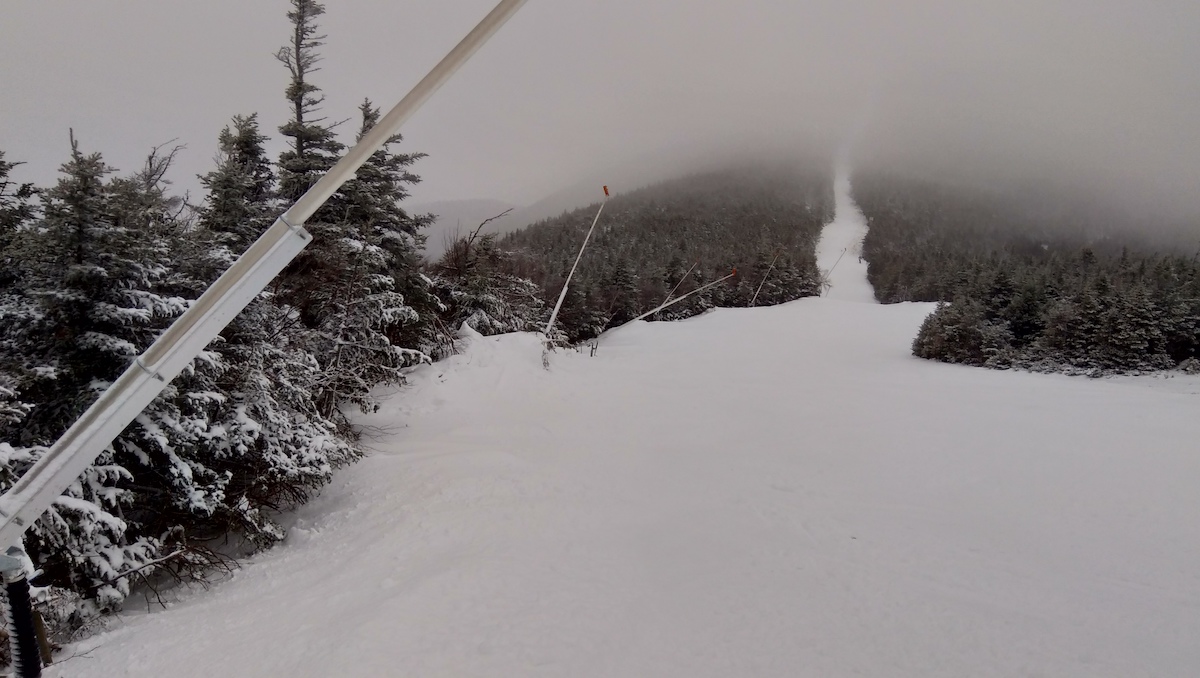 You got to zoom in on this one to see it.

It’s on the left before the second snow gun. I saw the spot and was like oohhh. Took my shovel there and piled a little more snow and tried to carve it out better but there’s a lot of ice in there and my plastic shovel couldn’t do much. So I kept hitting it and eventually carved out a take off.

One surprising day I went up there to find 3-4 inches up there and some wind drifts along the left side there and it was good and had a nice soft landing. It was sketchy though because if you zoom in there was a branch sticking out into the trail and you had to point it between the stick and snow gun to land right.

But luckily someone cut that stick out and fortunately did not take the jump out so it’s safer and better.

Farther down on the left of this trail is another sidehit that’s fun but I didn’t make except dig out a rut and some ice in the take off. I didn’t take a pic of that one though. It’s just past this one to the left on that last roller before Taft flattens out towards the saddle. 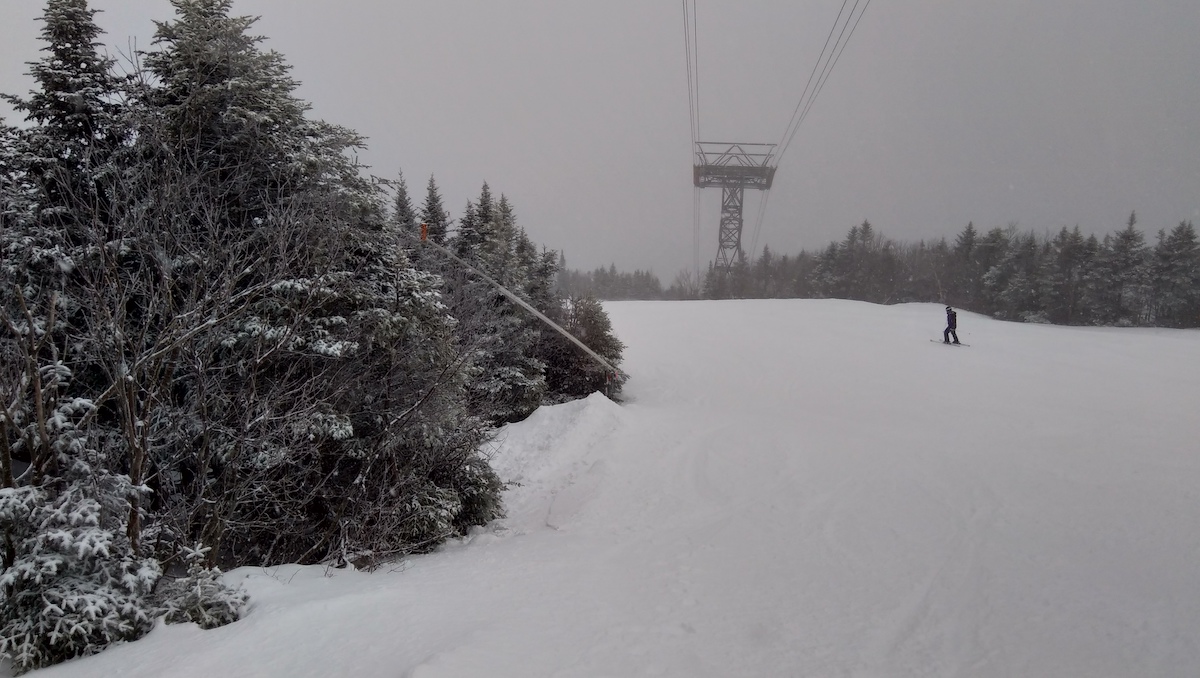 This one to the left already lost it’s glory as it hardly exists anymore. The snowcats had built up an icy pile of snow on the side of a little roller there and I thought that would be a good place. Then it snowed and I went in with my shovel and made a nice smooth take off on the day of the pic. It’s between the 1st and second tram tower. 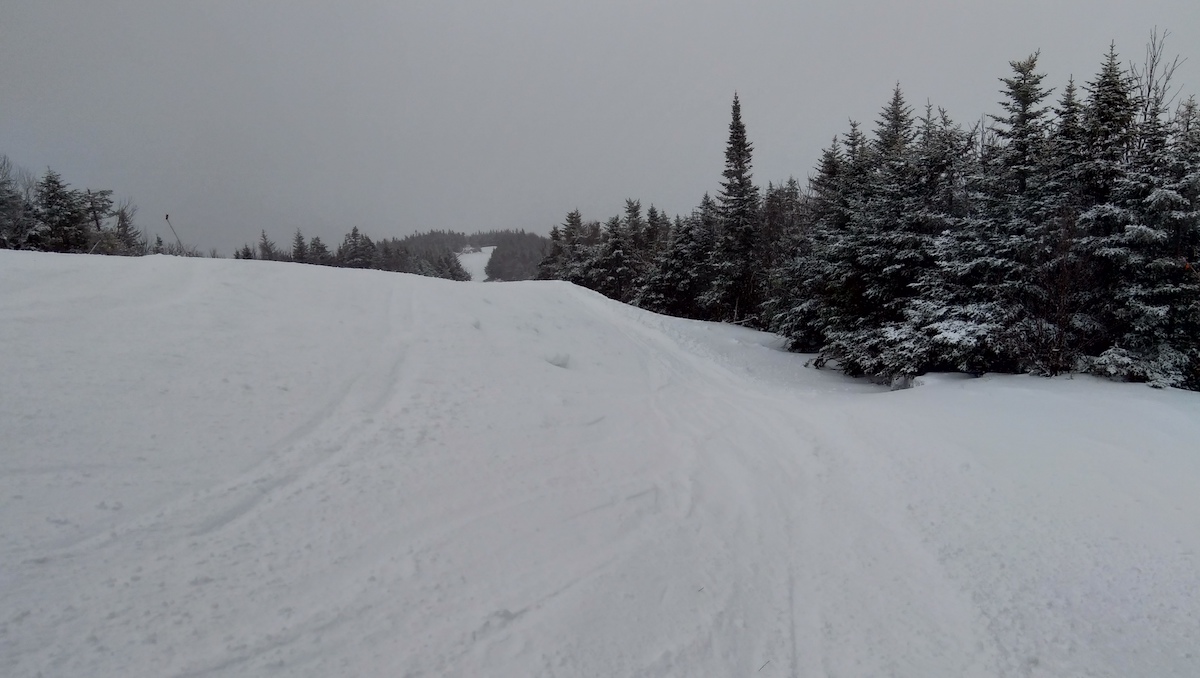 This one is also on Tramway below the other but near the 2nd tower shown in the previous pic. There’s a bank there on the side and you can drop off it and into this gully and shoot back on the trail.

It was kinda there but I went in with a shovel and chiseled it out and made the take off cleaner although last time I saw it it wasn’t looking very good.

Imagine a new kind of “park”

Normally a terrain park is on a separate part of the mountain.

But what if the park was all over the mt?

I mean it kind of is already, but what if you built a sidehit here, a berm there and a hip over there? What if you just enhanced some of the natural features already there?

But someone might say that’s dangerous. Well, it depends on the feature and where you put them skiing is dangerous already and if you mark the hits off with signs and put them out of the average skiers way then you’re probably okay.

Some people like to ride the whole mt. and in safe areas on the sides of trails or where there is space you could hire me to build side hits with a shovel and basic tools;-).

It could be a new kind of park. You could be first to the marketplace with this kind of park^^. You could put some signs there next to features to warn people and hire me to make them (with my degree in fine art I could guarantee that they will stand outˆˆ!).

If you want to see some awesome non-terrain park sidehit jumping check out Arthur Longo’s side hits series… I recommend #3.

Of course most of us including myself don’t ride anywhere near his level. But here are a few more side hit jumps I made.

A neighbor and family friend down the rode let me build some jumps on his hill. Some you can see a bit in the video above towards the end. They were melting down and this was one of the last days there. I would go there on days off and hike them.

This hill actually had a rope tow on it way back in the 60’s. There is also some steeper terrain up in the trees you could do if it ever snowed enough. You could get 500 vertical ft here with a rope tow up into the trees.