What a day. Some crazy homeless guy possibly on drugs tried stealing my money as I was street performing on Grant in Chinatown, SF. I do a hybrid kinda street performance that entails a costume (see the latest), some miming, story telling, goofing around, and beatboxing.

I divided this post into 2 parts as there were 2 altercations with this same guy within maybe 10-20 minutes.

So I was sitting out on Grant St. in Chinatown doing my pink man show and waiting for someone to push play. Then this guy who wasn’t wearing a t-shirt or shoes comes by and picks up my money can sitting between my legs and starts walking off.

At first I thought is this guy joking?

I told him to stop and he kept walking. So I threw him with a judo throw. It happened fast and I can’t remember what kind of throw it was, it was something like osoto gari or o guruma or harai goshi.

He hit the ground, my money went flying and then there was that moment of thought…

“Arm bar him, get on top or this guy is probably going to go away…”

That was my mistake. He got up hit me in the side of my temple and than ran over to a store across the way and grabbed a bin of umbrellas.

Then he tried throwing them at me and eventually ran off.

After that I was thinking about my mistake. I was telling myself… “You got to get on top of the guy and finish him with a submission. That’s why he got up and hit you. That happened cause you didn’t control the situation. Don’t assume he is going to go away.”

Luckily most people are good people and a few people collected my money that had flown everywhere and watched it while this was happening.

Weird too, after that the woman who works next door gave me $20 and another guy $5. It’s weird how that works. The same thing happened another time when a guy was being a jerk throwing these loud firecrackers near me and then I got angry and went over to him and said some things.

Maybe people like drama or maybe it’s compassion. Maybe some people feel a sense of compassion for this pink or blue dude who people are messing with.

Anyways back to the story…

Then he came back.

He started saying I took some of his stuff. This guy was crazy. He wouldn’t go away and kept walking around me. This time I took off my sign that I wear. Then he took his shirt off the ground and started whipping me with it.

This is all happening on the sidewalk and middle of the street.

There was that thought (a moment) of, “do I back off or attack?” I actually attacked him and grabbed him and got him up against a car from behind in a rear naked choke.

But his chin was tucked and I couldn’t finish him. Later I thought how I could have got that choke… more on that later.

Then another guy comes and asks if we could get off the side of the car. So I threw the guy again on the pavement and got on top of him. He was pulling on my shirt and pushing towards my face.

The guy is fighting, but eventually I got his wrist to the ground. I kept my elbow by his head to keep him from biting me. I was thinking this guy could bite, try grabbing my balls or any other dirty thing.

Once I got my grips I pulled it down and up toward his hips. Then I heard some pops and cracks in his shoulder or elbow, the guy yell and then suddenly he became limp and apologetic.

If I wanted to be mean or really destroy his elbow or shoulder I would have done it again even deeper. But he stopped fighting and started saying sorry.

So I just held him there in that arm lock.

I was thinking, “do I let him go or hold on or what?”, but I held on, the cops eventually came and handcuffed him. I guess he was causing problems up and down Grant.

Things I learned from that fight

So that’s my story about using judo and jiu-jitsu in a street fight. I always wondered if it would work. I mean it should right? I had been training in jiu-jitsu for maybe close to 3.5 years frequently and in judo for a few years less often.

But you never really know until you are in a fight.

Even after part 1 I was thinking about that mistake and well like most things in judo or jiu-jitsu there are no mistakes.

I know it sounds a little cliche, but…

There are only learning experiences. You may have heard that if you have been practicing jiu-jitsu. It may sound cliche, but it’s the truth.

And I got the chance to immediately apply what I had learned from the first episode. I knew this guy was a problem when he came back so I took my sign off. He took his shirt off the ground and was whipping me with his shirt and then I attacked.

In the end I submitted the guy until the cops came. But learned a few things along the way.

It doesn’t matter if it’s a real fight, rolling at the gym or a competition.

The same sort of reflection happens every time you roll with someone. When you fail you can look back on what you did and think about what you will do next time.

My performance glasses got f*cked up, I got a bump on my temple from getting hit, scratch on my forehead and a bruise on my knee – mounting on the pavement is a lot harder than a mat in the dojo, but otherwise I am o.k.

I noticed that guy had a bloody hand when I had him in an arm lock and I am pretty sure by the sounds of things mentioned earlier that something tore or broke in his elbow or shoulder.

I didn’t punch or kick him I just did what I learned.

I wanted to get a video because I saw some people recording it, but left by the time the altercation was finished. So hopefully one will surface on Youtube or somewhere else that I can use in the next week or so.

Seeing some pink street performer dude fighting on Grant Street in Chinatown, San Francisco is a little unusual so maybe a video or two will surface somewhere.

Before I got into jiu-jitsu I heard people talk about how it can make you more confident. I always wondered if it had made me more confident. I still don’t know, but had these things happened 4 years ago I think the outcome may have been different.

The cops were actually pretty cool to me which was surprising considering I had known one of the cops for a long time. I think that same cop seems to respect me more now for whatever reason.

This is my latest outfit. Hanging out in Chinatown, SF. 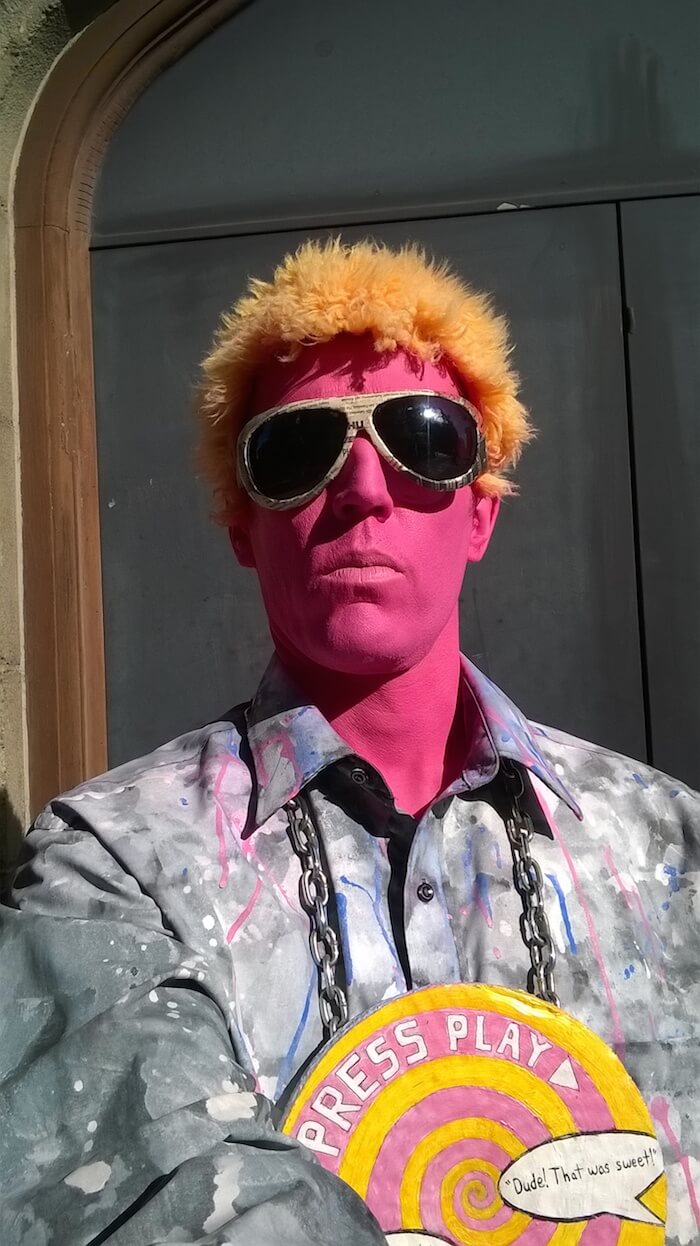 I guess I’ll call myself pink man fu. Before I was blu man fu and then white man fu, haha. Maybe I need a new name.