Did you believe everything that your doctor told you about your meniscus?

If you did then you don’t need to read this, but if you didn’t then read on.

If you are a big thinker and you want to heal your meniscus (ideally without surgery) so you can get back to your game then this is probably for you.

WELCOME TO THE TERROR DOME. 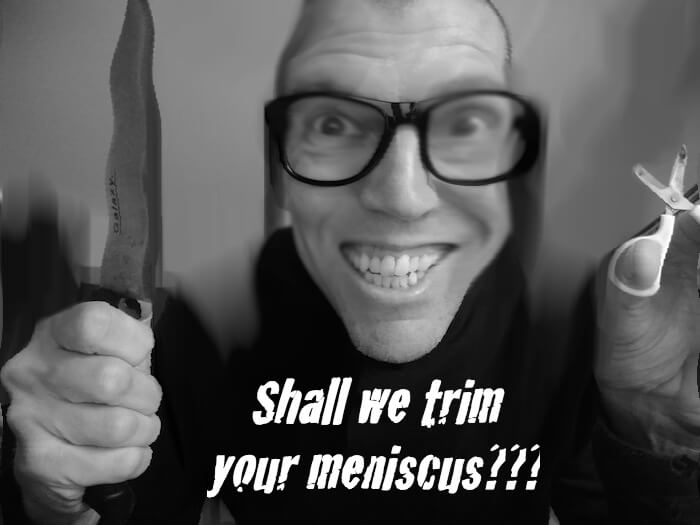 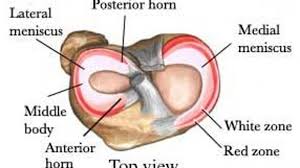 Is it really that black and white?

There is some truth to that to say that the white zone is not vascular.

But to say it can’t heal there isn’t a fact.

You’re not getting the most up to date information when you consult your ‘average’ orthopedic doctor.

You’re not getting the best medical advice or attention you could receive.

You’re getting old information and practices.

Do you want to heal your meniscus without surgery?

Chances are you can.

Although that ‘could’ also be inflammation from trauma and not just a piece of torn meniscus.

I’ve torn my meniscus in judo and jiu-jitsu 2 times. Aside from that I’ve had countless injuries from snowboarding, basketball and even drunk bike riding at 2am in the morning 20+ years ago.

And maybe you too.

So how does your knee feel now?

Does it feel like someone sliced up the inside of your knee with an x-acto and then kicked it?

Does it feel sketchy to walk?

Does it feel like it could give out at any moment?

Well, I can teach you how to heal it (most likely without surgery) and if you decide to get surgery I can even help you recover faster and better from it.

The most common practice to fix a torn meniscus is a partial meniscectomy.

Chances are if you get a partial meniscectomy that you will develop osteoarthritis (OA) in that knee.

One source suggests that if you cut out as little as 10% of your meniscus that it increases joint stress by 70%. Your chances of developing arthritis increase exponentially the more they remove.

If you remove part of your meniscus then you change the biomechanics of the knee.

Some people can quickly return to sports and activity within a few weeks after partial meniscectomy.

But how will you fare down the road?

Well, according to this study…

“Nearly 63% of knee meniscus surgery patients developed knee arthritis in the meniscectomy knee within 8 years, on average, following surgery. Compare this to the opposite knee that was not operated on: 28% developed arthritis in that same time period.”

Your odds of needing a knee replacement in the future increase 3 fold when you get a meniscectomy according to this study.

Yeah, but what about a ‘partial’ meniscectomy?

“Partial meniscectomy, the most common orthopedic surgical intervention, is recognized as a strong risk factor for knee OA.” – Source

“However, meniscectomy is not ideal because it disrupts the normal anatomical structure and function of the meniscus.” – Source

Any sort of meniscectomy (partial or full) removes the torn bit before it has any chance to heal.

But you should be very careful about what any orthopedic surgeon tells you because you are likely getting dated information and practices.

What about meniscus repair vs. partial meniscectomy?

But it is not without risk.

And many surgeons will not decide what treatment they will do until they go inside your knee with a scope. So even if you lean towards repair many will not be able to guarantee you that they will do a repair and you could wake up with less of a meniscus.

In the BJJ forum on Reddit someone commented on their stitches.

“Meniscal repairs have a higher re-operation rate than partial meniscectomies, although they are associated with better long-term outcomes.” – Source

And the weird thing is that many doctors may only try the repair surgery if you’re of a certain age or if the tear is in the red-zone.

But if it’s in the red zone why even try to repair it?

They say your meniscus tear won’t heal because there is no blood flow to part of the meniscus and tears in the red zone have a better chance of healing.

So if it could heal there why even mess with it?

But doctors have financial interest$ to mess with it. Your torn meniscus is no tragedy to him – it’s money in the bank.

Your doctor is biased like everyone else including me (and more on me later). And while he may be good at using that trimming tool…

There goes your meniscus…

He has limited experience and training because he’s a ‘specialist’.

You’re not getting the big picture when you go see an orthopedic surgeon for your knee.

Your getting a particular orthopedic ‘surgeons’ view on how to fix your meniscus.

There’s not necessarily one way to heal your knee, but he is likely practicing one way.

And he is working for a slow changing institution – MEDICINE.

Even if you find a great surgeon working privately he still has to confirm to certain ‘standards’.

Medicine like education, government and religion is slow to change.

“Changing clinical practice is a difficult process, best illustrated by the time lag between evidence and use in practice and the extensive use of low-value care.” – Source

And I can guarantee you that the medicine and treatments for a torn meniscus will be very different 50 years from now.

DO YOU THINK I AM TALKING NONSENSE HERE????

“A staggering 36,000 randomized controlled trials (RCTs) are published each year, on average, and it typically takes about 17 years for findings to reach clinical practice.” – Source

I can’t say all orthopedic surgeons will do you in and mess up your knee.

You may have good luck and get a great surgeon.

Yet many people don’t.

Do you know the search related to feature on the bottom of the Google search results page?

Check this data out.

These ones stood out the most to me.

You read above that the chances of getting arthritis after partial meniscectomy are fairly high and that there is a sizable chance of repairs failing.

And what that image just showed you was another metric of what might happen if you get surgery.

So if you don’t want to flip a coin…

Then maybe you should explore some other options to optimize your healing.