In the last few weeks I have done quite a bit of fasting. Feb. 22 I started some alternate day fasting then most recently completed a 4 day fast.

Why did I do this?

To help heal injuries namely my knee and shoulder. I tore my knee close to 10-11 weeks ago and the shoulder was probably from November when I did that last judo competition.

I received some damage in that one in my shoulder and eye.

I think my knee is getting better, but shoulder is really sluggish.

I often eat within an 8 hour window. And the longest fast I’ve done prior to this was 3 days (83 hours) in San Fran.

But I did this mainly to help heal injuries.

And some other things…

More details on those are coming in my new ebook that I think will be named Healiscus.

After that 66 hour fast I felt some improvement in my knee.

In the past since 2015 I’ve done a handful of fasts around 66-81 hours, one day a week fasts, and for the last year+ eating usually within a 4-8 hour window.

This is the longest fast I have done so far, previously it was 83 hours.

So I had been doing an alternate day fast (which probably made it a little more difficult to do) and kept reading about the benefits of a 5 day fast or fasting mimicking diet. I was going for 5 days, but didn’t make it as you’ll see below.

I didn’t eat on Sunday and then I ate on Monday and stopped around 9pm. I was planning on just the alt day fast but, decided to push.

Rode my bike down the river towards the south of Sawara-ku and then up the mountain to Bozu waterfall (13km). Felt ok. 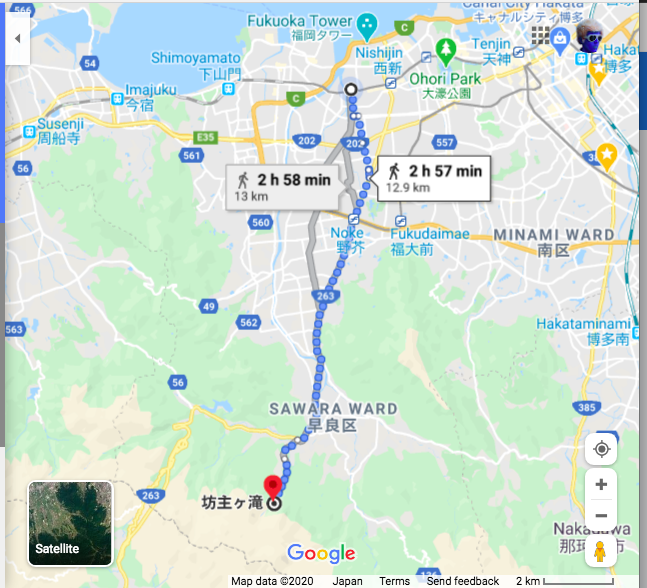 Never realized it was that far, but it’s mostly a nice ride if you go down Muromi river as there is a bike path along the river.

The last part of it was up hill so with one speed bike I was walking. I almost turned around several times, but kept saying let’s go a little further.

Needed a dose of nature.

Saw a quirky house and a cool little bamboo forest. 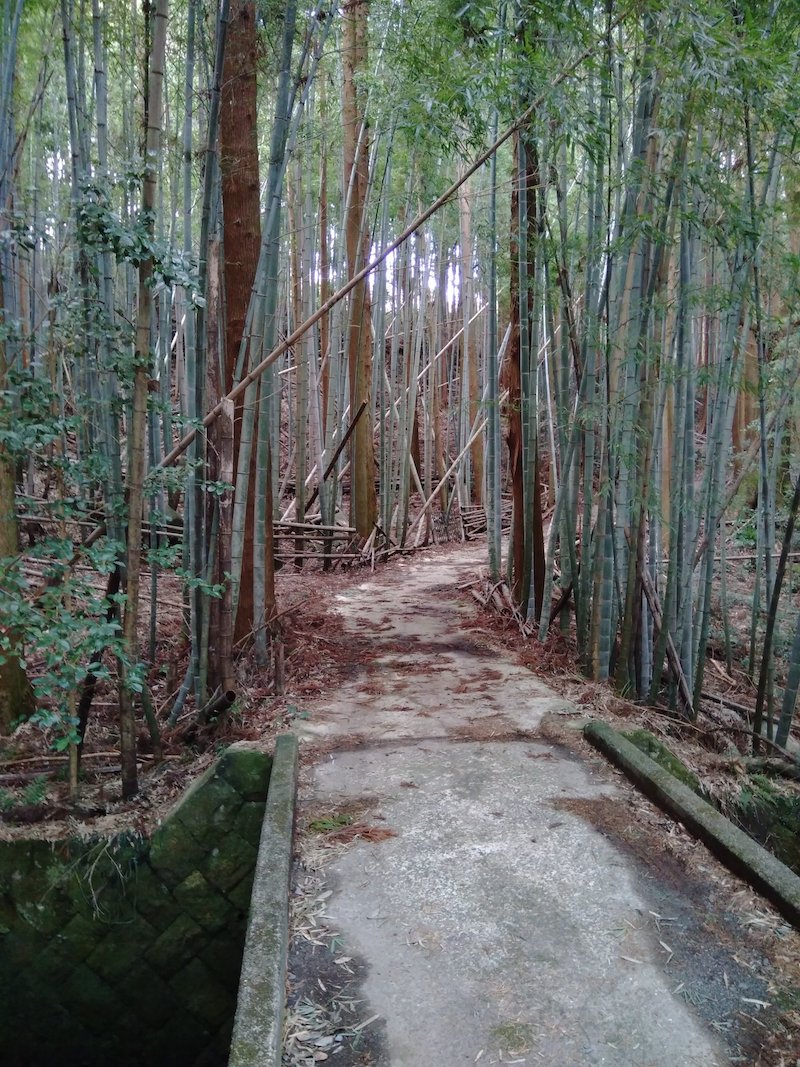 Most of the mountains in Fukuoka are covered in Cedar trees that look like they were planted.

Saw signs of Kanayama, Mt. which was 6km and another for Bozu falls which was 1 km so I went that way. 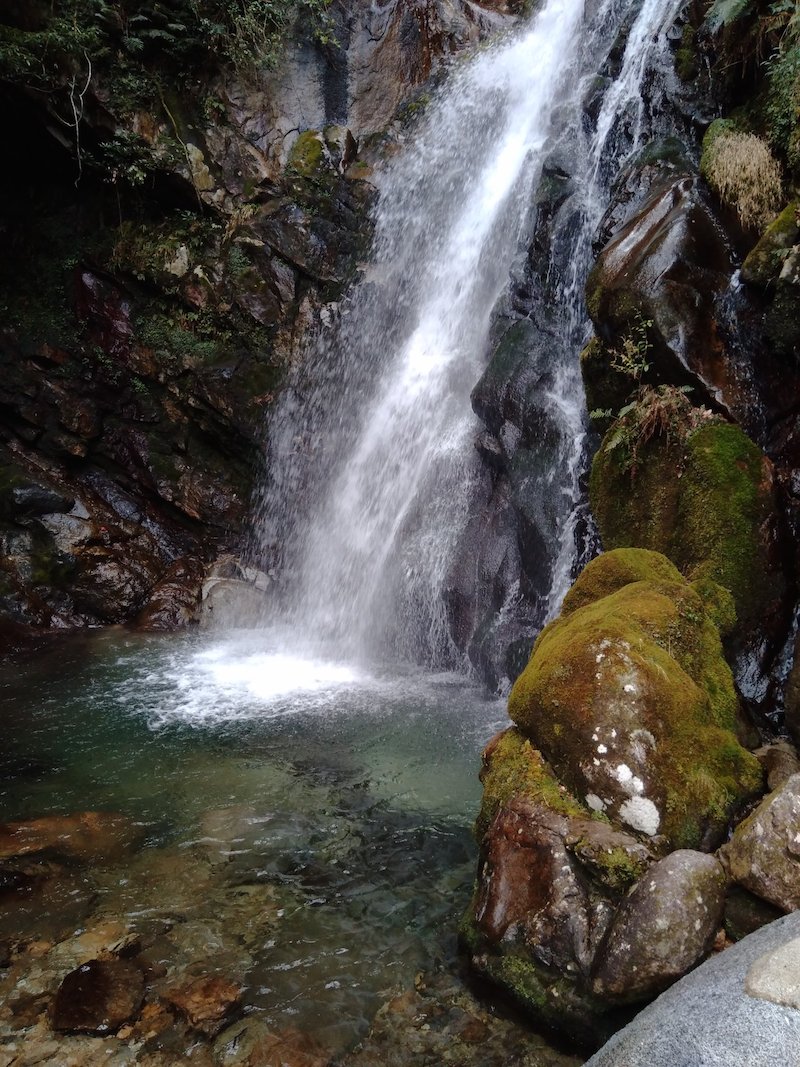 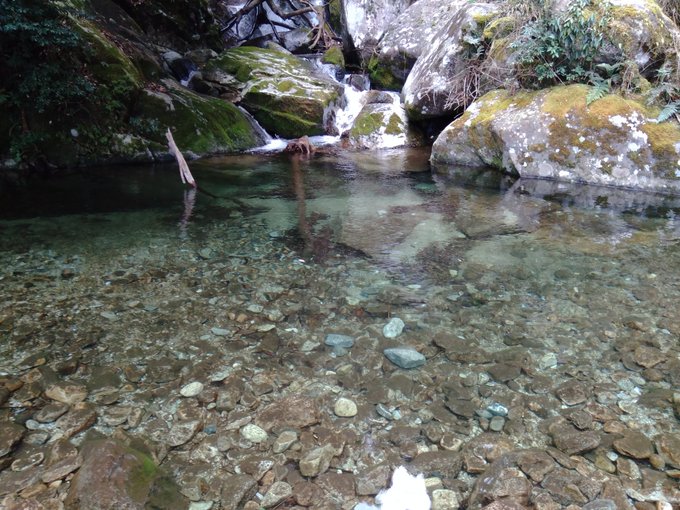 But I think cause I had been doing this alternate day fasting I was feeling a little hungrier and lower energy than I normally would on a 24 hour fast.

I didn’t eat but I drank green tea.

Today was low energy. All day I have felt low energy. Noises were loud and people annoying.

I didn’t drink green tea which also might have had an effect. I didn’t get a headache though which is a typically caffeine withdrawal side effect.

I went for a few walks down the river and out once looking for lactase and then a little hike to a temple on a hill which is nearby and less than 1/2 mile or so.

Lied down a bunch.

Felt dizzy and wobbly at times.

Now it’s like 62 hours into a fast. Been up for an hour, feel o.k. It’s sunny. I’ll probably go out for a walk and do some yoga first.

Yoga was somewhat more difficult than usual. Thinking about the foods I want to eat. Thinking of walking to the store to get some green tea.

Then drinking it maybe decaffeinating it. If you let the tea soak a bit (some say for a minute) then dump it out and then infuse it again it will have less caffeine. The first infusion has the most caffeine.

Some say caffeine may interfere with some of the effects of fasting and others don’t. Some studies say green tea promotes autophagy, yet I don’t know about the stem cells and growth hormone.

And that’s what I am after. Yesterday was no green tea. Today we’ll see.

So we got some tea, and I decaf’d it pouring off maybe 70% of the caffeine so they say. I feel slightly more crisp or sharp.

So I learned that if you fast and you normally drink tea or coffee then if you want to do a water fast then the best thing to do would be to cut out your caffeine intake a few days before you food fast otherwise you are going to have 2 shocks to your system.

Or just drink it.

The other thing I have been doing the last 2 days is a lot of massage with my aluminum bottle (kinda like a foam roller) and tennis ball.

These are very neglected.

Things I should be doing way more often. I realized all the effin’ pain I have locked up in my legs. Muscular tightness, pain and imbalances.

After a few sessions I feel like I am walking different.

I feel like I got some things done today. I wrote quite a bit. I’ve been working on a new ebook. And I updated some other stuff on ESLinsider.

The feeling I’ve had is somewhat of an aversion towards people noises etc. Kinda like how I usually feel, LOL, but a little more extreme.

Kinda like when you are sick or I was also reminded of psilocybin mushrooms – how I felt averse to people, but without the paranoia.

Now it’s 10:47pm and I feel o.k. Not struggling or feeling very weak. Going to get off line here soon and sit in my little DIY sauna I made with a small electric heater and the built in heater in my room and a tarp.

But works o.k. not quite hot enough actually a third heater would be better. See you tomorrow.

Oh I forgot to say I noticed I have a bit of acne which is surprising as I haven’t eaten in 73 hours. Some suggest it might be the hormones in fat since I am now running on fat.

Glycogen gets burned off most say in around 24 hours.

Today started at 3:00am. I woke up at 3am and couldn’t go back to sleep. It was very cold. So I browsed the internet a bit and tried to go back to sleep, but didn’t work.

Was it the caffeine from yesterday?

Maybe partly. So I decided to go for a walk. And I hiked up Atago temple and a took a picture about 10 minutes before sunrise.

Going to write a bit, drink tea and then probably take a nap.

I tried and we dozed for about 10 minutes and then that was that. Did a little yoga, a sweat, a little work, and some massage.

Also got some buckwheat tea. It’s quite nice. It tastes a little like genmaicha with that roasted rice flavor, but there is no green tea in it. I like it.

Because I need some sleep.

Felt very annoyed with people today when I went to the store. I wonder is it some sort of intuition or is it just hunger? I saw some guy say on Reddit that he felt more intuitive while fasting.

Hmm, I wondered, but was skeptical.

I feel definitely more irritable. I have no desire to talk to people or be near them. It’s 3:31 and it’s been about 91 hours. This is the farthest I have been.

Still shooting for tomorrow night 9pm. That will be 5 days.

And then we eat.

Food sounds orgasmic. Yet, I am kinda o.k. now. Stomach is fine.

It’s 9pm and I took a nap for a few hours. Less than 24 hours to go. 96 hours completed. Feeling kinda ill.

I was intending on fasting today, but last night I started to feel very sick. I tried meditating and couldn’t really do it. I couldn’t maintain my focus.

I felt nauseous and I couldn’t sleep. I noticed whenever I have a bad night of sleep during a fast it makes it much more likely that I will break that fast the next day.

Could have been caffeine in the tea from the day before because I drank some later in the day even though I ‘decaffed’ it.

So at about 10pm (97 hours) I was craving salt and I took a handful of spirulina and then I made a soup with: nori, wakame, spinach, shiitake mushrooms, fresh parsley, salt, pepper, MCT oil and olive oil.

It was very delicious.

But I had to take it slow as I was afraid of throwing it up.

Fortunately I didn’t. And then a little while later, I made a stir fry with chicken, eggs, some of those same vegetables and nori.

Then some milk, blueberries, and ground peanuts.

Woke up a few times once at 3am and had a little milk and berries.

And this morning I went and got some good grano padano cheese. I got a craving for it last night.

I felt a little weak riding my bike and I had to go a few miles down a noisy busy road to get it. The local places don’t have good cheese like that.

In Japan and everywhere else I have lived in Asia you’ve got limited options for good cheese.

And then for breakfast I had:

Yum, looking forward to more food today. Fasting gives you an amazing appreciation for food. It’s like that saying…

Another benefit of fasting

This is purely subjective. People do fast for spiritual reasons, but I think an extended fast can give you some insight on your problems.

I did a Google search for:

Then I got a whole page of results with titles “god” this and “god” that. So to get rid of results that you don’t want to see you put a “-” in front of the word like “-god”.

And then got a bunch of “allah” listings, so I put a “-allah”. Searched again and that got rid of the “allah” results. 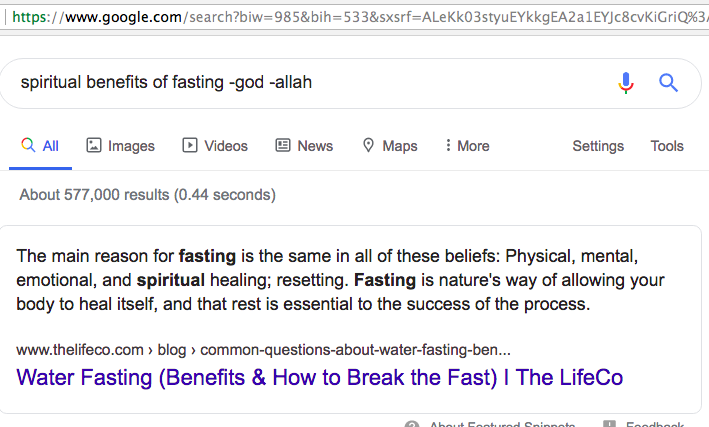 I guess to some people spirituality is synonymous with “religion” although most of those people (with a fixed mentality) would never call it “religion”.

Anyways one thing I realized is that for a prolonged fast it would be best to be somewhere tranquil. Kind of similar for psilocybin.

Not the kind of thing you want to do in a busy place. I don’t think so.

I found people and noises to be annoying.

I found myself crossing the street to avoid people.

Lately I really enjoy watching the ducks. There are lots of different kinds of sea birds in Fukuoka that are nearby and that I see everyday.

But I have a new appreciation for ducks.

And in Fukuoka there seems to be different kinds of ducks.

Ducks can fly, swim, go under water, walk a bit and they’re cute especially when they stick their heads under water and their butts up in the air^^.

And I wondered about the ducks life as I watch them float out on the sea. What are they tuned into?

And speaking of search results…

I found this to be funny.

If you start doing a lot of research into fasting then you are likely to find Valter Longo who is well known for his research on fasting and cancer and his 5 day ‘fasting mimicking’ diet (calorie restriction).

So I did a search with his name and at the bottom of the page looked at the search results which I found to be funny.

Why were people searching for that?

Ian’s over and out.

Shoulder, legs and knee. The combination of massage and fasting have me feeling rejuvenated.