I once read that all emotions could be boiled down into two: love and hate. And I certainly do not love feminism.

How could I like it? It’s all about resentment. I remember being told one time that feminism is about “equality”. I think actually my sister might have told me that.

However, if it was really all about equality then why do they call it feminism? Shouldn’t it be humanitarianism? Or fem-masculinism? Or perhaps something else?

Sure you may have been discriminated against because you were a woman. But you are not alone and there is always someone out there that had it worse than you.

Why did you choose the person you did? Why not someone else? In fact why not anybody or everybody else?

That would be less discriminatory.

I think feminism has nothing to do with equality. That’s like an excuse. It seems to me that it’s a group of bitter, angry and/or resentful women who want more rights and more power.

You are not actually equal either. You are similar, but there are inherent biological differences between men and women.

For example, in the most egalitarian societies like in Scandinavia women and men tend to default to more typical work roles. Females doing more social and caregiving type positions and men doing more engineering, science and computing roles.

I am sick of seeing the word “compassion”

I was on the bus yesterday and I saw a girl – that’s a right girl, I could have said woman, but I naturally said girl and she was filling out an application that had a question on it.

It said, “What is your definition of compassion?”

I think they should have said, “What do you think our definition of compassion is?”

It’s being used in such a superficial way by “morally superior” people.

I got in a little argument with my sister and father the last time I went home about some law that they are or were trying to pass in Canada about making it mandatory to use certain pronouns to refer to transgendered people.

I think that is stupid.

Do you what you want, but why do you need to have a law that makes it mandatory to use certain words for you and your ways?

There are no laws for such things for men and women. Why the f*ck should we make up more laws and more privileges for a supposed new sex.

That is just dumb.

Anyways so they seemed to think I was like some sort of homophobe or some conservative freak because I don’t support that.

If you are homosexual then good for you. Do that. But I can’t relate. If you want to get married to the same sex then do that. I am not going to try to stop you, but I still can’t relate.

It’s not my business.

And don’t try to make it that either. I have met a few gay men who seem to be attracted to straight men or think they can convert a straight man or even go so far as to touching a straight man.

And the same goes for the transgendered folks.

Homosexuals are roughly 5% of the US population

That number is from the book, “Everybody Lies: Big Data, New Data, and What the Internet Can Tell Us About Who We Really Are”. And it’s based on what people are actually doing online and what they are searching for in the USA.

Of course there are differences between locations as the place where I currently live is in San Fran and that number is way higher.

And I would guess that the numbers of transgendered folks are on average less than homosexuals.

So should there be more privileges for a tiny minority of people compared to the vast majority?

Like o.k. you are a human, but are you actually an exceptional person? I understand that you want to be exceptional as I’ll mention below…

Here’s an advertisement I saw in the BART. 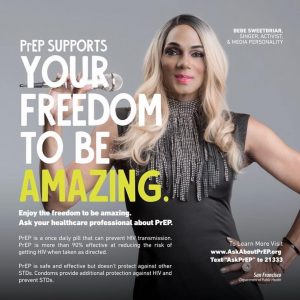 What the f*ck is this? What does this suggest? That it is o.k to be transgendered, sleazy and suck a lot of dick if you have HIV?

In my opinion this is the worst ad that I have seen on the BART. Like you are going to be amazing if you dress up like this? More on attention later.

The World Health Organization used to define transgendered folks as having a mental health problem. But the LBGT groups did a bunch of protesting and that changed in 2018.

These politically correct groups have some power, but are they correct?

You were born in the right body

First off many think that they were born in the wrong body, but you had no choice. I think that is a problem and you have issues. Lots of people regardless of their sex have stuff that they wish they could change about their body.

Some people are lucky and attractive and others are not. That’s the way it is. Life is not fair.

Your first response may be that is because they get a bunch of shit from other people. Well, maybe but some places are more accepting than others such as in Scandinavia.

I’d say almost everybody at one time or another is going to want to change something if they could.

You are what you are.

On the physical sense you are what you are and I think you need to accept that or otherwise you are going to suffer. I think you should be more grateful for what you have.

Because it could be worse.

You do literally have issues if you think you were born in the wrong body. If you want to be a man and you are a woman then you have a problem and some would say that is an issue.

It’s probably not going to make you happier. That’s what the studies say. You might get a temporary boost in esteem, but then your happiness levels will likely return to how they were.

Remember you can’t actually see yourself most of the time.

And if you really are supposed to be a woman and you are a man then why not just cut your dick off? Well, there are studies out there that show that many are not happy with their modified genitals.

I know a lot about attention and how to get it by changing my appearance. When I dress up, paint my face and do all of that I can get attention. I think some people just want attention – so they change their sex or pretend to be someone else and look different.

Just like the transgendered performer in the pic above. It’s about attention.

There is a chance that if you are transgendered or gay that it is just a phase. You might not feel the same way ten years from now as you do now.

You are probably influenced by the internet.

It’s all in your head

This is just stupid.

On the bathroom door

I hate seeing this shit which is posted on the public library bathroom in Chinatown, SF.

99.9999% of the time there are just 2 sexes – male and female. A hermaphrodite is a mutation and other than that if you think you are somewhere in between then it is all in your head.

You were born with either two XX chromosomes or an XY set of chromosomes. You either have a penis or a vagina. There is no in between.

That’s all in your head.

That sign was probably the work of more protesting and what not by the LBGT community.

It’s not like you can just choose your sex and who you are.

But, yeah you can pretend or get surgery or take hormones, but you are just messing with nature if you do the later two.

You have limitations and one of those is your body.

Look, do what you want, but in my eyes you don’t deserve any special rules or privileges because of your made up sexuality or because you are gay or a feminist.

Like I said earlier I have no interest in baseball so I am not going to go to the game or hang out with them or pretend to like it.

So those were some of the things I mentioned and then my sister says something like, “well how about a little compassion?”

I said I am not the Dalai Lama.

Later I sent an email to her and a video titled something like, “Compassion is a vice” that someone made from one of Jordan Peterson‘s clips.

And I never heard back from her which was like 4 months ago. Which I think means I am getting the cold shoulder, ghosted, the silent treatment or whatever you want to call it.

It’s ironic that the word “compassion” was used, because ignoring someone for months on end is not anything like compassion.

It’s a word with meaning, but it’s a word that is getting abused and certain people seem to have their own definition and agenda behind it.

I think feminists feel entitled as well as some of these other groups. They feel like you owe them something and ironically in their quest for “equality” I think they just became more like men – their supposed oppressor.

It’s forbidden to hit a women and almost everyone including many men will be quick to blame a man or come after a man who hits a woman.

But when the same thing happens the other way around most people don’t seem to care. In fact it’s totally acceptable for a woman to hit or slap a man in the face.

And you can see this in the media. I can recall a movie I saw recently called “Colossal” that shows a woman slapping a man several times. 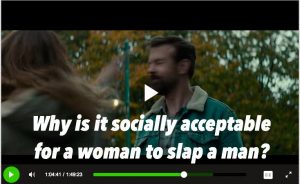 If you don’t want to get hit then don’t hit anyone else. But some American women seem to feel justified with hitting a man. And there are some women out there – like some of my neighbors who abuse the fact they are female.

They’ll run their mouths and be totally disrespectful and say things that most men would never say to each other because of the possibility of physical aggression.

And the funny thing is that if something happened and a man did resort to violence with a women then they would call the cops and play the innocent little girl or make up some lie to cover their ass.

The law is mostly on their side.

The fact is that in many cases women are the ones that instigate fights.

Women – you are only one half of the coin

Male and female, light and dark, yin and yang. You cannot have one without the other. You are not “god”. You are not simply the most amazing creature on earth because you have a vagina and can give birth.

I have no interest in politics and I think feminists and the LBGT community are something like political parties. I think a lot of their issues stem from resentment.

They want more rights because they are hurt and unhappy. It’s an egotistical thing. Sure you may have had it tough, but so hasn’t everybody. And if you think you had it tough then I can assure you that there is someone in some 2nd or 3rd world country that has had it way tougher.