How do you choose the right size snowboard boots?

Should yo you get a size bigger than your normal street shoes?

Usually people size down if anything.

Why? Because you definitely don’t want any play.

But it depends on you.

Do you want a “comfort” fit, a “normal” fit or a “performance fit”?

A “comfort fit” might be for the person who snowboards twice a year or maybe 3 times if they are lucky. A “normal fit” is kinda like what we do at Cannon in the rental dept.

Normally we tell people if your toes touch the front it’s okay.

Then kick your heel back, lace up or buckle up your boot then bend your knees and flex and if your toes come back a bit then your probably good.

You don’t want your foot to move around in the boot.

Now a “performance fit” isn’t for someone renting gear.

Rented boots are usually all packed out so they aren’t going to feel like a new boot.

You might be surprised what your foot actually measures.

Here I am measuring my left foot.

Ever use one of those?

This is a good place to start.

Forget your current shoe size and start with one of these.

So that’s a good place to start, but keep in mind all boots don’t necessarily follow that.

My old boots were 9.5 Burtons then I recently got a size 9 in Thirtytwo boots which felt very tight when I first tried them.

I was questioning if they were too small, but after heat molding and 2 days I decided they were two big because my foot got loose in the boot.

DON’T GET HUNG UP ON A NUMBER (a certain size).

People come into rentals to get boots often saying, “I wear a size ___ (fill in the blank)”.

That’s their street shoe size. Some have it in their head that they are a certain size and their ski boots should be the same.

Sometimes they are and often they aren’t.

But we pretty much always start with the Brannock scale.

Recently I had pretty much narrowed my choice of new boots online down to a 9.5 TM 3 Thirtytwo boot.

I thought 9.5 because my old Burton’s were a 9.5 and my larger foot measures 9.5 and I almost bought them online, but I decided to go back to this shop to try them on.

The 9.5’s felt like sort of comfy, but I could tell they were going to pack out and be too roomy. So I tried the 9 on and I felt pretty tight in those and after about 10 minutes I got some pain in one pinky toe.

I couldn’t imagine going any smaller.

It didn’t even cross my mind. Hesitantly I went back the next day, bought them and did heat molding. I put a little soft foam toe cap over my toes, stood and sat in them for 10 minutes+.

It was actually a little painful.

After the heat molding I took the caps off and put my foot back in and noticed they were a little more spacious although it felt like the foot bed on one foot was bunched up in the toes.

I sort of shrugged it off and figured it would fix itself.

Later I read the sign below in the boot box, examined the messed up insole and figured it was either defective or damaged from heat molding. 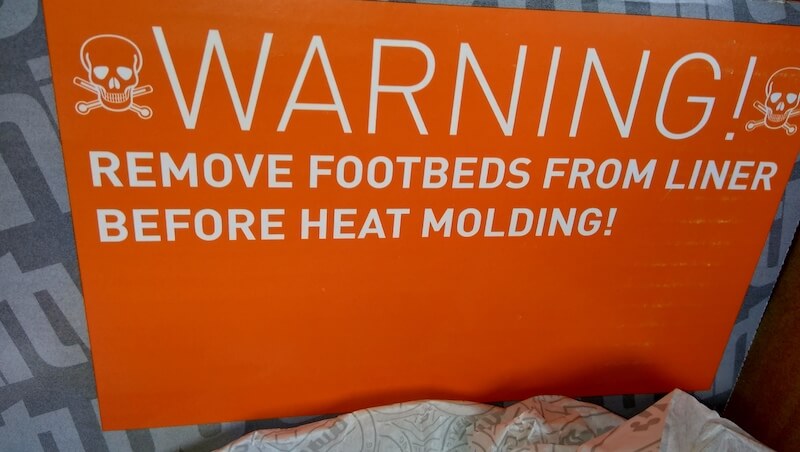 At the end of my first day riding in them I noticed one of my feet (actually the longer one) was sliding a little bit.

Then I did one more day noticed further play in the boot then I decided I would sell them because the boot was only going to break in more.

Should you feel any pain?

Depends on what you are going for. And it’s hard to see and no one wants to feel pain, but will that boot feel the same after you use it 2, 5, 10 or 20 days later?

Because it’s going to break in and pack out.

More comfort now might be more pain later (and less control) when your foot is sliding around in the boot. But it depends what you are going for. If you are someone who just rides less than ten days a year then yeah, maybe you want to stay away from pain.

As Angry Snowboarder said you have 3 kinds of fits:

Have you ever played B-ball or soccer and needed some sneakers or cleats? You don’t want to play with your foot moving around in those right?

If your foot is sliding around in the boot or sneaker then your game is going to be off and that’s the same with boarding, but sneakers and snowboard boots are different in that a snowboard boot contains a lot more soft material.

That will pack out.

How much will a snowboard boot pack out?

Well, that probably depends a bit on the construction of the boot and liner and you.

But this site says:

And this site says:

…at least 15 hours of wear before they break in and pack out to half a size bigger.

Most every place you look will say “yes” but is that necessarily so?

In the rental shop this is usually a bad sign and we will give people larger boots if their toes are curled.

But what’s different about rental boots and the people who rent them?

A rental boot is usually a packed out boot.

They’re not new boots and these people are just going for a day. Most of them are newcomers and don’t want to be uncomfortable at all.

They want a comfort fit or…

If they are a little more experienced then they are probably going to want a normal fit.

A normal fit is how we try to get them and that’s toes touching the front, heels back, and when they squat their toes should come back.

Then there’s the performance fit.

I don’t think anyone comes into rentals looking for a performance fit. That’s for people who ride a lot and are buying a new boot.

A new boot is not a packed out boot.

How that boot feels in the shop when you try it on won’t be how it feels 10 days later.

So it’s tough because a little short term pain now is a better fit later. And if the inside of a boot expands in width and length anywhere from a 1/4 to 3/4 of an inch then just maybe toes curling a little bit isn’t bad.

But don’t get my wrong you could go too small.

So how small is too small?

Do a shell fit

This  makes sense when I saw it. So take the liner out of the boot and put your foot inside the shell. Does it make contact with anything when centered in the boot? If so then it’s obviously too small.

Then slide your foot forward till your toes touch and see if you can stick at least a finger behind your heel.

The liner will flatten out to a pretty ridiculous degree, but the shell isn’t going to change much at all. So check your shell fit:

If your foot does neither of those things with just the shell, then your liner will most likely pack out enough to accommodate your foot. Most liners will lose just about a whole shoe size worth in space after 5-10 days of riding.

Does the thickness of the liner matter?

I think it could but that’s tough to measure.

Perhaps get a smaller boot than you think

Start with the Brannock scale, but don’t assume that’s set in stone as each company and each boot is going to be a little different in terms of size and fit.

Do a shell fit.

I like to be in the smallest boots I can manage. At first, my toes are definitely curled up a bit. There’s some mods you can make to ease that pressure until the liners pack out, and some mods you can do to speed that process along. It’s important to really seat your heel into the heel pocket by kicking your heel on the ground before you lace the boots up. Maybe settling that heel pocket issue will be as important as making more space in the toe box.

Most heat molding techniques involve expanding the toe area by wearing the top of an extra sock or special toe cap or I’ve even read of some people kicking their toes into something.

But what about kicking your heels into something?

That is a good way to put your boot in. It’s what we recommend people do when they first put on a boot in the rental shop.

Kick your heels back and lace your boot up and do a squat or riding stance.

If you stand stiff legged your toes should touch the liner but when in snowboard stance it should only barely graze the liner.

Should your boots be comfortable to walk in?

Snowboard boots are made to snowboard in not to walk in. So walking around in them isn’t the best test. A better test is simply mimicking your riding stance.

I think doing a shell fit (above) is one of your best tests for a how a boot will feel in the long run.

Bonus: How to fix a new boot that’s too tight

Bonus: How to fix an old boot that’s too loose

What sources say for choosing a ‘ski boot’ size

Of course you are a snowboarder, but how do skiers think when it comes to sizing boots? I took this bit from EVO.com:

Beginner/Intermediate Skiers should generally choose a boot close to their indicated Mondopoint length or slightly longer, even if it feels small. Keep in mind that the liner of the boot will compress after you ski in it a few times, and you’ll generate more space fairly quickly.

Intermediate/Advanced Skiers should also choose a boot close to their indicated size or slightly shorter, but in a stiffer flex. Pay attention to the width of the boot as well, and choose one that offers a snug fit if possible.

Advanced/Expert Skiers normally choose a shell size 1/2 to a full size smaller than their indicated size for a super precise and responsive fit, and a stiff or very stiff flex. Downsizing in ski boots may call for a collaboration with a skilled bootfitter to make the boots comfortable enough for skiing.

Any differences compared to snowboarding?

The sizing above sounds kind of like the different fits mentioned before like: comfort fit, normal fit and performance fit.

It’s like most beginners want a comfort fit because they don’t understand the difference and snowboarding is painful enough to begin with.

An intermediate rider wants a normal fit because they’ve learned.

Your average advanced rider has probably had a number of boots and knows boots break in and they want that glove like fit when it does because they want a performance fit.

I’ve heard skiers say that and I think it partially applies for snowboarding.

Some advanced riders prefer softer boots. For example, lots of guys (some of them professional) who ride a lot of park and do jibbing use softer boots.

They may like the flexibility for tweaking their tricks and setting tricks up at slower speeds.

Yet, then there are even pro riders who do lots of jibbing that wear stiffer boots.

People who ride a lot of steep terrain and like to go super fast also tend to like stiffer boots as they offer more stability, support and control at higher speeds.

And some people ride lots of different terrain and want an all around boot so they look for a medium stiffness boot.

The flex is part preference and not just ability.

There you go I hope this helps you decide on the right snowboard boot size for you. Let me know how it goes.